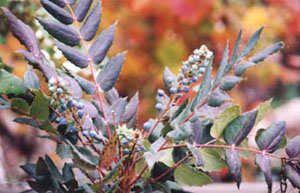 Acknowledgement of the gifts of the natural world is one of the greatest contributions of Native Americans. For thousands of years the use of native plants for food, medicine, and ceremony has been an important part of family and community life. A great number of these plants received mainstream acceptance and were listed in the US Pharmacopoeia, a register of approved drugs used in medical practice. It is significant to note that in the research for treating cancer and infectious diseases like AIDS, modern science is now affirming the medicinal properties of many native plants and the ancient knowledge of our Native American ancestors.

Educatior and herbalist, Judy Bluehorse Skelton, works with Multnomah and Washingtion County Indian Education programs, the Confederated Tribes of Siletz, OMSI, and many other groups throughout the Northwest. Speaking and leading field trips, herbal walks, and cultural activities, she focuses on the tradition and modern uses of our native plants for food, medicine, utensils, and more.

Of Nez Perce, Cherokee and Chickasaw descent, Judy is a member and mentor of the American Indian Science and Engineering Society, and assists in the Clinic Medicinary at the National College of Naturopathic Medicine.

Cultures all over the world have used native plants for nourishment, medicines, ceremony and beauty. They were used to make tools, clothing, and shelter. All the tribes of North America used herbs for aches and pains, bites, stings, bruises and wounds, sore throats, fevers, to fight infections, to help with childbirth, and to treat serious illnesses. Healing with plants has been very successful; many people carry on that tradition today. Plants can be prepared for food and medicine in many ways. One of the simplest is to chew the plant and swallow the juice. Another simple way is to make a tea by adding the plants to water. Pacific Northwest natives were and still are used in this way.

OREGON GRAPE(Mahonia spp.), a native of the Northwest and Oregon's state flower, has been used by tribes throughout the region for indigestion, infections, and skin conditions. The root is used; one of its principle constituents, berberine, (responsible for the root's bright yellow color) has been used as a dye, and contains anti-microbial properties. The U.S. Pharmacopeia lists its effectiveness against many bacteria, including staph and strep. Oregon Grape root provides liver support, and its bitter taste aids digestion.

INFUSION
Leaves, stems and flowers are prepared using the infusion method. They're steeped (soaked) in water that's been brought to a boil, then removed from the heat source. The herb itself is not boiled. The steeping could last for as little as 3 minutes for beverage use, but for medicial use, steeping for at least 15 minutes is a good rule of thumb. Keep covered to prevent medicine from evaporating in the air. Put 1 1/4 cups of cold, clean water into a teakettle or pot and bring to a boil. Remove boiling water from heat and immediately add 1 tablespoon of herb. Keep lid on pot and let steep for 10 to 15 minutes.

DECOCTION
Roots, barks and seeds require more time to release their medicines, and are simmered in water for about 10 minutes, then allowed to steep for another 15 to 20 minutes. Again, keep covered during simmering and steeping process to prevent medicine from escaping. Use 1 tblsp. herb to cup water.

Decoct 1 Tblsp herb in 1 cup water for 10 minutes, covered. Sip as needed. Judy made this tea at Bosky Dell, and ooohh it smelled and tasted marvelous!

return to top of page

The Let Us Build Cully Park! Tribal Gathering Garden from PrettyGoodProductions on Vimeo.